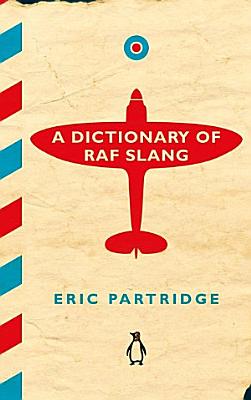 The perfect stocking filler for anyone who imagines themselves flying a spitfire . . . Drop your visiting cards, put aside your beer-lever, stop being a half-pint hero and discover the gloriously funny slang which was part of everyday life in two world wars. Passion-killers: Airwomen's service knickers, whether twilights (the lighter, summer-weight variety) or black-outs (the navy-blue winter-weights). A wise directive has purposely made them as unromantic in colour and in design as a wise directive could imagine. Thanks to the work of Eric Partridge in 1945, the hilarious slang of the Royal Air Force during the first two World Wars has been preserved for generations to come. While some phrases like 'chocks away!' have lasted to this day, others deserve to be rediscovered . . . Beer-lever: From pub-bars, meaning the 'Joystick' of an aircraft. Canteen cowboy: A ladies' man. Half-pint hero: A boaster. One who exemplifies the virtue of Dutch courage without having the trouble of going into action. Tin fish: A torpedo. Umbrella man: A parachutist. Visiting-card: A bomb. Wheels down: Get ready - especially to leave a bus, tram, train. From lowering the wheels, preparatory to landing. Whistled: In a state of intoxication wherein one tends to whistle cheerfully and perhaps discordantly. The Dictionary of RAF Slang is a funny and fascinating insight into the lives of our RAF heroes, in a time gone by.

A Dictionary of RAF Slang

Authors: Eric Partridge
Categories: History
The perfect stocking filler for anyone who imagines themselves flying a spitfire . . . Drop your visiting cards, put aside your beer-lever, stop being a half-pi

A Dictionary of RAF Slang

A Dictionary of Slang and Unconventional English

Authors: Eric Partridge
Categories: Foreign Language Study
The definitive work on the subject, this Dictionary - available again in its eighth edition - gives a full account of slang and unconventional English over four

It's a Piece of Cake or R.A.F. Slang Made Easy

Authors: C. H. Ward-Jackson
Categories: History
Many of the earliest books, particularly those dating back to the 1900s and before, are now extremely scarce and increasingly expensive. We are republishing the

The New Partridge Dictionary of Slang and Unconventional English: J-Z

Words and the First World War

Authors: Julian Walker
Categories: Language Arts & Disciplines
"An illustrated analytical study, Words and the First World War considers the situation at home, at war, and under categories such as race, gender and class to

A Dictionary of Catch Phrases

Authors: Eric Partridge
Categories: Foreign Language Study
A catch phrase is a well-known, frequently-used phrase or saying that has `caught on' or become popular over along period of time. It is often witty or philosop

A Concise Dictionary of Slang and Unconventional English

A Dictionary of Slang and Unconventional English

Authors: Eric Partridge
Categories: Language Arts & Disciplines
Eric Honeywood Partridge, renowned philologist, etymologist and lexicographer, dedicated his life to the study of language but it is for his work on slang, and