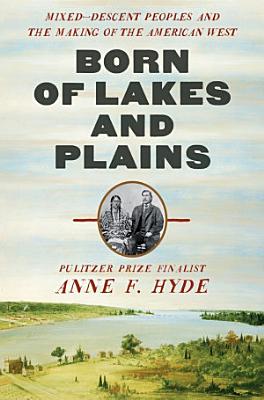 A fresh history of the West grounded in the lives of mixed-descent Native families who first bridged and then collided with racial boundaries. Often overlooked, there is mixed blood at the heart of America. And at the heart of Native life for centuries there were complex households using intermarriage to link disparate communities and create protective circles of kin. Beginning in the seventeenth century, Native peoples—Ojibwes, Otoes, Cheyennes, Chinooks, and others—formed new families with young French, English, Canadian, and American fur traders who spent months in smoky winter lodges or at boisterous summer rendezvous. These families built cosmopolitan trade centers from Michilimackinac on the Great Lakes to Bellevue on the Missouri River, Bent’s Fort in the southern Plains, and Fort Vancouver in the Pacific Northwest. Their family names are often imprinted on the landscape, but their voices have long been muted in our histories. Anne F. Hyde’s pathbreaking history restores them in full. Vividly combining the panoramic and the particular, Born of Lakes and Plains follows five mixed-descent families whose lives intertwined major events: imperial battles over the fur trade; the first extensions of American authority west of the Appalachians; the ravages of imported disease; the violence of Indian removal; encroaching American settlement; and, following the Civil War, the disasters of Indian war, reservations policy, and allotment. During the pivotal nineteenth century, mixed-descent people who had once occupied a middle ground became a racial problem drawing hostility from all sides. Their identities were challenged by the pseudo-science of blood quantum—the instrument of allotment policy—and their traditions by the Indian schools established to erase Native ways. As Anne F. Hyde shows, they navigated the hard choices they faced as they had for centuries: by relying on the rich resources of family and kin. Here is an indelible western history with a new human face.

Born of Lakes and Plains: Mixed-Descent Peoples and the Making of the American West

Authors: Anne F. Hyde
Categories: History
A fresh history of the West grounded in the lives of mixed-descent Native families who first bridged and then collided with racial boundaries. Often overlooked,

Summary of Anne F. Hyde's Born of Lakes and Plains

Authors: Everest Media,
Categories: History
Please note: This is a companion version & not the original book. Sample Book Insights: #1 The story of John Johnston, an Irishman, and his Ojibwe wife, Green P

Canadian Crusoes: A Tale of the Rice Lake Plains

The Routledge Handbook of Pidgin and Creole Languages

Authors: Donald B. Smith
Categories: History
The word “Mississauga” is the name British Canadian settlers used for the Ojibwe on the north of Lake Ontario – now the most urbanized region in what is n

Born in the Wild

Authors: Lita Judge
Categories: Juvenile Nonfiction
What do grizzly bear cubs eat? Where do baby raccoons sleep? And how does a baby otter learn to swim? Every baby mammal, from a tiny harvest mouse "pinky" to a