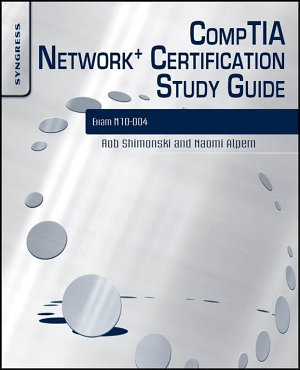 CompTIA Network+ Certification Study Guide: Exam N10-004, Second Edition, offers a practical guide for those interested in pursuing CompTIA Network+ certification. It presents the fundamental terminology needed to perform duties as a network technician and to pass the CompTIA Network+ exam. The book begins with a brief history of the development of networks, including their origins and where they are heading. It describes network models such as centralized and decentralized, and distinguishes between a local area network (LAN) and a wide area network (WAN). The discussions include cable connections and termination for the Network+ exam; the meaning of convergence; and the most common network devices being used on small and large networks, including the Internet. The role of switches in improving network functionality and enhancing security is described. The book also contains chapters on wireless networking; Open Systems Interconnection (OSI) model; Transmission Control Protocol/Internet Protocol (TCP/IP); wide area network (WAN) technologies; network security; and network management and troubleshooting. New to this edition in accordance with the newly revised exam is an intensified focus on network security Two NEW practice exams to help eliminate test-day jitters Tiered chapter ending questions that allow for graduated learning Covers everything from test taking techniques to advanced topics - keeping the beginner and intermediate IT professional in mind Layout of the guide parallels the Network+ N10-004 objectives for ease of study