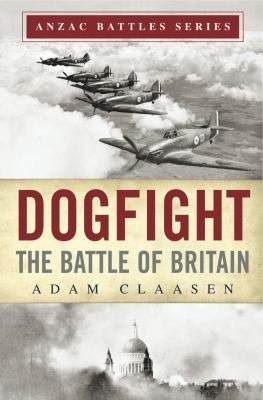 This book tells the story of Australians and New Zealanders in one of the Second World War’s defining and most memorable campaigns. From July until October 1940, the German air force (the Luftwaffe) sought aerial supremacy in skies over England as a prerequisite for an invasion of Britain (Operation Sealion). The ensuing conflict of Luftwaffe and RAF aircraft in the long summer of 1940 became forever known as the Battle of Britain. Of the 574 overseas pilots in the campaign, the New Zealand contingent of 134 airmen was second in size only to the Polish contribution. The Australian involvement, though smaller, was a healthy 37. Thus a fifth of overseas pilots were Anzacs. Among these colonials were some of the Battle of Britain’s widely admired aces. Of the top ten pilots with the greatest number of victories two were New Zealanders (C. F. Gray and B. Carbury) and one an Australian (P. Hughes). Australian and New Zealand aircrew were also employed in attacking enemy Channel ports and airfields as part of Bomber and Coastal Command’s attempts to thwart invasion preparations and blunt the Luftwaffe aerial onslaught. The Anzacs also had a fellow compatriot at the highest level in the Fighter Command system: the highly regarded New Zealander Air Vice-Marshal Sir Keith Park, who was instrumental in devising and implementing the integrated air defence of Britain around Spitfire and Hurricane aircraft, radio control and radar. In the spring of 1940, he was given the command of Group 11, which would face the brunt of the German aggression in south-east England. The success of Park’s plans and operational initiatives, and the role played by Anzac pilots and aircrew, would all contribute to the conflict’s eventual successful outcome.

Authors: Adam Claasen
Categories: History
This book tells the story of Australians and New Zealanders in one of the Second World War’s defining and most memorable campaigns. From July until October 19

Authors: Tony Holmes
Categories: History
Dogfight tells the story of Australians and New Zealanders in one of the Second World War's defining and most memorable campaigns. From July until October 1940,

Authors: Norman Franks
Categories: History
The history of WWI aviation is a rich and varied story marked by the evolution of aircraft from slow moving, fragile, and unreliable powered kites, into quick,

Australia's Few and the Battle of Britain

Authors: Kristen Alexander
Categories: History
During the summer and autumn of 1940, the Germans launched their Luftwaffe campaign to gain superiority over the RAF, especially Fighter Command. They were not

The Fallen Few of the Battle of Britain

Authors: Norman Franks
Categories: History
'Never in the field of human conflict was so much owed by so many to so few' Seventy-five years on the unforgettable words of Winston Churchill ring as powerful

From Dogfight to Diplomacy

Authors: Donald MacDonell
Categories: History
MacDonell's service career began in the 1920s. Shortly before the war he became a Squadron Leader and worked at the Air Ministry during the Phoney War. When hos

Authors: David Owen
Categories: History
Innumerable books have been published on the two most famous fighter aircraft of all time, the Supermarine Spitfire and the Messerschmitt Bf109. But books setti

Authors: Norman Franks
Categories: History
The Battle of Britain fought by The Few, as Churchill famously called them, will remain a legendary feat of arms for centuries to come. Sadly there remain only