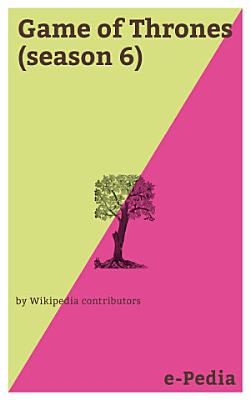 This carefully crafted ebook is formatted for your eReader with a functional and detailed table of contents. The sixth season of the fantasy drama television series Game of Thrones premiered on HBO on April 24, 2016, and concluded on June 26, 2016. It consists of ten episodes, each of approximately 50–60 minutes, largely of original content not found in George R. R. Martin's A Song of Ice and Fire series. Some material is adapted from the upcoming sixth novel The Winds of Winter and the fourth and fifth novels, A Feast for Crows and A Dance with Dragons. The series was adapted for television by David Benioff and D. B. Weiss. HBO ordered the season on April 8, 2014, together with the fifth season, which began filming in July 2015 primarily in Northern Ireland, Spain, Croatia, Iceland and Canada. Each episode cost over $10 million. This book has been derived from Wikipedia: it contains the entire text of the title Wikipedia article + the entire text of all the 593 related (linked) Wikipedia articles to the title article. This book does not contain illustrations. e-Pedia (an imprint of e-artnow) charges for the convenience service of formatting these e-books for your eReader. We donate a part of our net income after taxes to the Wikimedia Foundation from the sales of all books based on Wikipedia content.

Authors: Wikipedia Contributors
Categories: Reference
This carefully crafted ebook is formatted for your eReader with a functional and detailed table of contents. The sixth season of the fantasy drama television se

Authors: Contributors, Wikipedia
Categories: Fiction
This carefully crafted ebook is formatted for your eReader with a functional and detailed table of contents. Captain America: Civil War is a 2016 American super

Focus On: 100 Most Popular American Agnostics

Focus On: 100 Most Popular Television Series by Sony Pictures Television

Focus On: 100 Most Popular Centers (Basketball)

Authors: Jason Mittell
Categories: Performing Arts
Over the past two decades, new technologies, changing viewer practices, and the proliferation of genres and channels has transformed American television. One of

Focus On: 100 Most Popular Television Series by Universal Television