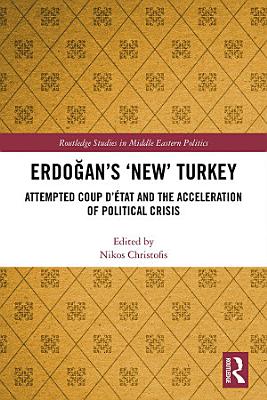 Demonstrating how Turkey’s politics have developed, this book focuses on the causes and consequences of the failed coup d'état of 15 July 2016. The momentous event and its aftermath challenges us to ask if the coup was the cause of Turkey’s present crisis, or simply an accelerant of trends already in motion, and thus a catalyst for the realization of Erdoğan’s latent authoritarian impulses. Bringing together approaches from politics, sociology, history and anthropology, the chapters shed much-needed light on these crucial questions. They offer scholars and nonspecialists alike a comprehensive overview of the implications of the coup attempt and its aftermath on the issues of religion, democracy, the Kurds, the state, resistance and more besides. Its effects have been felt in almost every aspect of Turkish society from religion to politics, yet it came at a time when Turkey was already experiencing significant social and political turmoil under the increasingly authoritarian leadership of President Recep Tayyip Erdoğan. Readers interested in contemporary politics, Turkish and Middle Eastern studies will find the volume useful, as they ponder other cases in this era of democratic retrenchment and global turmoil.