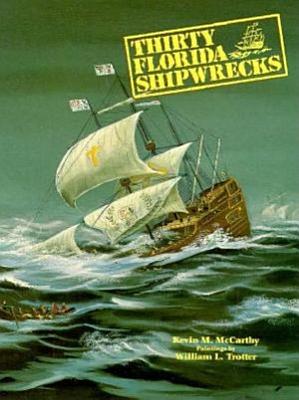 Sunken treasure, cannibalism, prison ships, Nazi submarines, the Bermuda triangle—all are tied into the lore of shipwrecks along Florida's coasts. There are as many shipwreck stories as there are thousands of Florida shipwrecks. This book offers thirty of the most interesting of them—from the tale of young Fontaneda, who wrecked in 1545 and was held captive by Indians for 17 years, to the story of the Coast Guard cutter Bibb, which was sunk off Key Largo in 1987 to provide an artificial reef and diving site. In between there is the Atocha, flagship of a Spanish treasure fleet, which sank in a hurricane in September 1622 and was found, along with its $100 million worth of gold and silver, by Mel Fisher in July of 1985. Each shipwreck story has a map pinpointing its location and a full-color illustration by renowned artist William L. Trotter. There is an extensive bibliography and a foreword by Florida state underwater archaeologist Roger Smith.

Authors: Kevin M McCarthy
Categories: History
Sunken treasure, cannibalism, prison ships, Nazi submarines, the Bermuda triangle—all are tied into the lore of shipwrecks along Florida's coasts. There are a

Authors: Douglas Waitley
Categories: Travel
In this third of a three-part series, follow Douglas Waitley along the beaches and over the hills of north Florida, watching rocket launches, meeting dolphins f

Authors: Sean A. Kingsley
Categories: Social Science
In 1990 Seahawk Deep Ocean Technology of Tampa, Florida, commenced the world’s first robotic archaeological excavation of a deep-sea shipwreck south of the To

The Book Lover's Guide to Florida

Authors: Kevin M. McCarthy
Categories: Travel
"Here is the book lover's literary tour of Florida, an exhaustive survey of writers, books, and literary sites in every part of the state. The state is divided

Authors: Steven D Singer
Categories: History
Over 2,100 shipwrecks from the 16th century to the present; the most comprehensive listing now available. Wrecks are arranged primarily by geographical section

Authors: Doug Alderson
Categories: Travel
Everyone knows the beaches of Florida are a top spot for locals and tourists alike, but many natives or visitors might not know the intricacies of Florida's coa

Authors: Robert Forrest Burgess
Categories: Social Science
Cave divers are the elite, and this is their story--a story of pushing the limits of technology and human endurance.