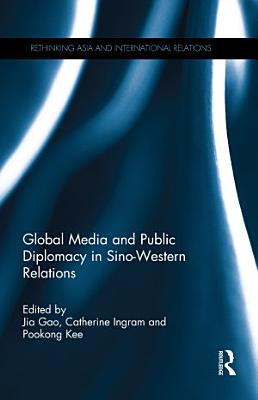 Many researchers and China observers would agree that understanding how China pursues global communication is critical for assessing its growing soft power. While soft power as a concept has, in many ways, become almost inextricably linked with the PRC's (People's Republic of China) international diplomacy of the twenty-first century, the specific role of global media within soft power diplomacy and the corresponding influence of Western mediated public diplomacy within China is a lacuna that has remained largely unexplored. Moreover, the different Chinese and Western perspectives on the influence of global media and public diplomacy on Sino-Western relations, and the changing role of global media on this crucial aspect of international politics, have not yet been critically examined. This volume presents a broad social science audience with recent innovative scholarship and research findings on global media and public diplomacy concerning Sino-Western relations. It focuses on the implicit nexus between global media and public diplomacy, and their actual utilisation in and impact on the shifting relationships between China and the West. Special attention is given to the changing nature of globalised media in both China and Western nations, and how globalised media is influencing, shaping and changing international politics. The contributions delve deeply into both theory and practice, and focus especially upon the analysis of several key aspects of the issue from both Chinese and Western perspectives. This combination of approaches distinguishes the volume from most other published works on the topic, and greatly enriches our knowledge base in this important contemporary field.

Authors: J. Wang
Categories: Political Science
This book is about how China strives to rebuild its soft power through communication. It recounts China's efforts by examining a set of public diplomacy tactics

Social Media and e-Diplomacy in China

Authors: Ying Jiang
Categories: Social Science
As with many spheres of public life, public diplomatic communication is being transformed by the boom of social media. More than 165 foreign governmental organi