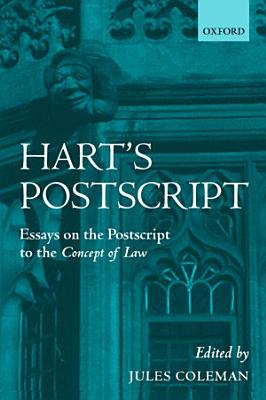 Published posthumously, the second edition of The Concept of Law contains one important addition to the first edition, a substantial Postscript, in which Hart reflects upon some of the central concerns that have been expressed about the book since its publication in 1961. The Postscript is especially noteworthy because it contains Hart's only sustained response to the objections pressed by his foremost critic, Ronald Dworkin, who succeeded him to the Chair of Jurisprudence at Oxford. The Postscript focuses on a range of issues covering both Hart's substantive view and his methodological commitments. In particular, Hart endorses Inclusive Legal Positivism, asserts that his is a methodology of descriptive jurisprudence which he contrasts with Dworkin's normative jurisprudence or interpretivism, while denying that his theory of law has a semantic underpinning. The essays in this collection address each of these issues in a sustained way. The book contains discussions of Hart's semantic commitments, his rejection of a normative jurisprudence as well as the extent to which he can embrace Inclusive Legal Positivism in a way that is consistent with his other stated positions. The book's contributors include the leading advocates of alternative schools of Positivist jurisprudence, important contributors to the methodogical disputes in jurisprudence and noted experts on the relationship of philosophy of language to jurisprudence. Among the contributors of note are: Joseph Raz, Jules L. Coleman, Stephen Perry , Brian Leiter, Scott Shapiro and Andrei Marmor.

Authors: Jules L. Coleman
Categories: Law
Published posthumously, the second edition of The Concept of Law contains one important addition to the first edition, a substantial Postscript, in which Hart r

Authors: Ronald Dworkin
Categories: Law
How should a judge's moral convictions bear on his judgments about what the law is? Lawyers, sociologists, philosophers, politicians, and judges all have answer

Authors: Mauro Zamboni
Categories: Law
This book reconstructs and classifies, according to ideal-typical models, the different positions taken by the major contemporary legal theories as to whether a

Formalism and the Sources of International Law

Authors: Jean d'Aspremont
Categories: Law
This book revisits the theory of the sources of international law from the perspective of formalism. It critically analyses the virtues of formalism, construed

A Companion to Philosophy of Law and Legal Theory

Authors: Dennis Patterson
Categories: Law
The articles in this new edition of A Companion to Philosophy ofLaw and Legal Theory have been updated throughout, and theaddition of ten new articles ensures t

Authors: Luís Duarte d'Almeida
Categories: Law
More than 50 years after it was first published, The Concept of Law remains the most important work of legal philosophy in the English-speaking world. In this v

Authors: Matthias Baier
Categories: Law
In an era where new areas of life and new problems call for normative solutions while the plurality of values in society challenge the very basis for normative