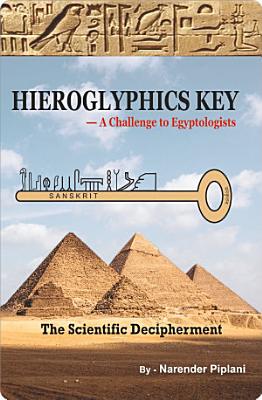 Hieroglyphic Key For the last two and a half hundred years, many Egyptologists have been searching and deciphering the Egyptian hieroglyphics and claiming that they have deciphered the hieroglyphics signs. But the truth is that not a single Egyptologist has been able to read even a single hieroglyphic sign. All their claims are false and wild guesses. This book contains the key from which you can unlock the mystery not only of Hieroglyphics but also the origin of Alpha-beta and any script of the world. You will know for the first time the true meaning of hundreds of words like Km.t, Mummy, Cairo, Ra, Eye of Horus and Ptolemy. Gardiner’s sign list (D30) phonetic is ‘nachb-kAw’ means ‘god Nehebkau’. It is neither two-headed snake nor the two arms raised in the prayer. The hieroglyph is based on Sanskrit homonyms word na–th-h नाथः which means ‘A rope passed through the nose of a draft ox or any pet. The other meanings are ‘a lord, master, protector, leader, God, husband. This hieroglyph was used mostly for ‘the lightning god’. (M22) Phonetic is ‘nichb’ means ‘sedge, reed’. Neither the hieroglyph is showing sedge or a reed. Actually, the pictograph was sketched to show the furrow in a field. The two side arms, which are declared ‘a set of leaves’ by European Egyptologists, these arm type lines are not leaves but showing the ridges like letter V between a furrows. The upper turn shows to come back for next furrow. Based on Sanskrit, the word is sh–mb-h शम्बः which means ‘Lightning: ploughing of a field and makes furrow, track or line as the lightning uses to plough the clouds. Other meanings are ‘To go, move, happy, fortunate’. Alan Gardiner declared this hieroglyph logogram U1 as a ‘sickle’ without knowing the Egyptian culture. Though, his searching of phonetic sound of first letter of the word ‘ma’ was correct. Next diphthong ng was forgotten by Copts. Alas! Egyptologists would have searched the ancient boats of Egypt. The Egyptian hieroglyph Gardiner sign listed no.U1 is a Sanskrit based Egyptian word m-ng मन्ग, which means ‘the head or front of a boat’. (E26) Transliteration ‘3b, 3bu, eb’ by European Egyptologist is not correct. Only Sanskrit has its correct word e–bh-h इभः which means ‘an elephant as well as cloud’. The other synonyms for an elephant are ‘g-j गज] h-sti हस्ती m-tn-g मतंग, ku-mbhi कुम्भी, m-d-k-l मदकल g-je-ndr गजेन्द्र ku-nj-r कुजंर dwi-p द्विप va-r-n वारण k-ri-sh करीश*. This hieroglyph of an elephant could be used for all synonyms words which mean ‘an elephant as well as cloud. ‘Opening of the mouth’ ceremony or ritual --- (F- 13) phonetic is ‘wp, jp’ means ‘horn’. But the real Sanskrit’s word is shri-nga श्रृन्गा which means ‘the horn’. (D-21) phonetic is ‘r, rr, p (kh) ar’ means ‘mouth’. But true word of Sanskrit is r-nh रन्ह which means ‘talketive, speaking. Often the first letter r of this hieroglyph has used in Egyptian texts. Egyptologists have misinterpreted the above hieroglyphic description as ‘opening of the mouth’. The Sanskrit complete word of Shri-nga श्रृन्गा of F13 and first letter r र of D21 (r-nh) is taken. Thus the complete conjunctive word is Shri-nga+r श्रृन्गार which means ‘A fragrant for dress or body, to make up, adornment of body’. This refinement by makeup of mummy (shabti) was ritual. The term Shri–nga-r (makeup) is for both the living and the dead person. Guessing to see the open horns means ‘opening of the mouth ceremony’ is wild guess. Not only this, the key given in this book is Australian aborigine and also reveals the mysteries of the language of the Kenya and the tribal of Africa. The key given in this book opens the locks of hidden secrets of every ancient religion, culture and civilization of the world, not just Peru, Inca and Maya.

Authors: NARENDER PIPLANI
Categories: Art
Hieroglyphic Key For the last two and a half hundred years, many Egyptologists have been searching and deciphering the Egyptian hieroglyphics and claiming that

An Hieroglyphic Key to Natural and Spiritual Mysteries, by way of representations and correspondences. Translated ... by R. Hindmarsh

Authors: Wendy Christensen
Categories: Egypt
This book opens with an introduction to the world and the geographic area in the years leading up to the empire, followed by a brief summary of the history of t

Official Gazette of the United States Patent and Trademark Office

HIEROGLYPHS OF THE PHAISTOS DISC: history and full text translation.

Authors: Vitaly Surnin
Categories:
This book is the preliminary part of a great work titled «THE BOOK OF THE EGYPTIAN: The beginning of the basic Egyptology or a key to the understanding of hist

The 10th International Conference on Computer Engineering and Networks

Authors: Qi Liu
Categories: Technology & Engineering
This book contains a collection of the papers accepted by the CENet2020 – the 10th International Conference on Computer Engineering and Networks held on Octob