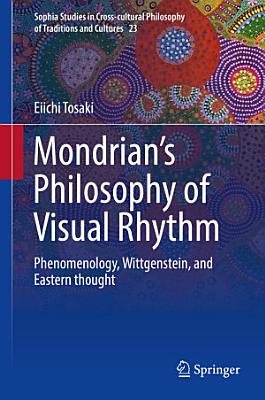 This volume investigates the meaning of visual rhythm through Piet Mondrian’s unique approach to understanding rhythm in the compositional structure of painting, drawing reference from philosophy, aesthetics, and Zen culture. Its innovation lies in its reappraisal of a forgotten definition of rhythm as ‘stasis’ or ‘composition’ which can be traced back to ancient Greek thought. This conception of rhythm, the book argues, can be demonstrated in terms of pictorial strategy, through analysis of East Asian painting and calligraphy with which Greek thought on rhythm has identifiable commonalities. The book demonstrates how these ideas about rhythm draw together various threads of intellectual development in the visual arts that cross disparate aesthetic cultural practices. As an icon of early 20th Century Modernism, Mondrian’s neoplasticism is a serious painterly and philosophical achievement. In his painting, Mondrian was deeply influenced by Theosophy, which took its influence from Eastern aesthetics; particularly East Asian and Indian thought. However, Mondrian’s approach to visual rhythm was so idiosyncratic that his contribution to studies of visual rhythm is often under-recognized. This volume shows that a close inspection of Mondrian’s own writing, thinking and painting has much to tell scholars about how to understand a long forgotten aspect of visual rhythm. Rodin’s famous criticism of photography (“athlete-in-motion is forever frozen”) can be applied to Muybridge’s zoopraxiscope, the Futurists’ rendition of stroboscopic images, and Duchamp’s “Nude Descending a Staircase.” Through a comparative study between Mondrian’s painting and these seminal works, this volume initiates a new convention for the cognition of the surface of painting as visual rhythm. “Mondrian’s simultaneous emphasis on the static and the rhythmic is hardly fodder for a publicist. Eiichi Tosaki has taken on the challenge of elucidating Mondrian’s theories of rhythm, and particularly his conception of “static” rhythm. The result is a tour de force that will forever alter the reader’s encounter with the works of Mondrian.” Prof. Kathleen Higgins

The Philosophy of Lines

Authors: Thorsten Botz-Bornstein
Categories: Philosophy
This book offers a philosophical exploration of lines in art and culture, and traces their history from Antiquity onwards. Lines can be physical phenomena, cogn

Theory and Practice of Contrast

Authors: Mariusz Stanowski
Categories: Science
The book Theory and Practice of Contrast completes, corrects and integrates the foundations of science and humanities, which include: theory of art, philosophy

The Palgrave Handbook of Screen Production

Authors: Craig Batty
Categories: Performing Arts
This handbook is an essential creative, critical and practical guide for students and educators of screen production internationally. It covers all aspects of s

The Saints of Modern Art

Authors: Charles A. Riley
Categories: Art
Asceticism seen as a powerful force in the art and thought of our time.

The Philosophy of Rhythm

Authors: Peter Cheyne
Categories: Music
Rhythm is the fundamental pulse that animates poetry, music, and dance across all cultures. And yet the recent explosion of scholarly interest across discipline

Philosophy and the Visual Arts

Authors: Andrew Harrison
Categories: Philosophy
This volume consists of papers given to the Royal Institute of Philos ophy Conference on 'Philosophy and the Visual Arts: Seeing and Abstracting' given at the U

The Routledge Companion to Philosophy and Music

Authors: Theodore Gracyk
Categories: Music
The Routledge Companion to Philosophy and Music is an outstanding guide and reference source to the key topics, subjects, thinkers and debates in philosophy and

A History of the Modern Movement: Art Architecture Design