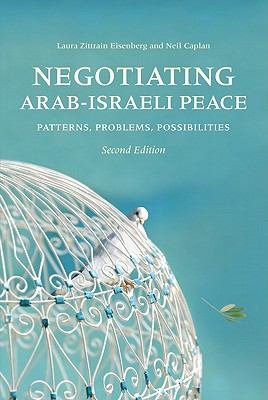 Thoroughly updated and expanded, this new edition of Negotiating Arab-Israeli Peace examines the history of recurrent efforts to resolve the Arab-Israeli conflict and identifies a pattern of negative negotiating behaviors that seem to repeatedly derail efforts to achieve peace. In a lively and accessible style, Laura Zittrain Eisenberg and Neil Caplan examine eight case studies of recent Arab-Israeli diplomatic encounters, from the Egyptian-Israeli peace of 1979 to the beginning of the Obama administration, in light of the historical record. By measuring contemporary diplomatic episodes against the pattern of counterproductive negotiating habits, this book makes possible a coherent comparison of over sixty years of Arab-Israeli negotiations and gives readers a framework with which to assess the relative strengths and weaknesses of peace-making attempts, past, present, and future.

Authors: Laura Zittrain Eisenberg
Categories: History
"In an innovative study, two historians of the Arab-Israeli conflict reflect on what their craft can contribute to peacemaking." -- Middle East Quarterly "A fin

Making Peace Among Arabs and Israelis

Authors: Laura Zittrain Eisenberg
Categories: Political Science
""In an innovative study, two historians of the Arab-Israeli conflict reflect on what their craft can contribute to peacemaking."" -- Middle East Quarterly ""A

How Israelis and Palestinians Negotiate

Authors: Tamara Wittes Cofman
Categories: Political Science
Refreshing and revealing in equal measure, this innovative volume conducts a critical/self--critical exploration of the impact of culture on the ill-fated Oslo

Authors: Karen A. Feste
Categories: Social Science
Although much has been written about the Arab-Israeli conflict and about general theories of negotiation, this analysis and history is unique in linking major i

Authors: Daniel C. Kurtzer
Categories: History
"Having observed earlier periods of determined, persistent, creative and wise American diplomacy on the Arab-Israeli conflict, we are left to ponder whether tha

Authors: Neil Caplan
Categories: History
One of the "10 Must-Read Histories of the Palestine-Israel Conflict" —Ian Black, Literary Hub, on the 100th anniversary of the Balfour Declaration The new edi

The Much Too Promised Land