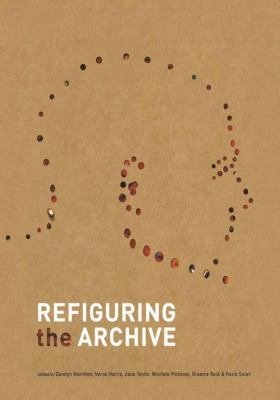 Refiguring the Archive at once expresses cutting-edge debates on `the archive' in South Africa and internationally, and pushes the boundaries of those debates. It brings together prominent thinkers from a range of disciplines, mainly South Africans but a number from other countries. Traditionally archives have been seen as preserving memory and as holding the past. The contributors to this book question this orthodoxy, unfolding the ways in which archives construct, sanctify, and bury pasts. In his contribution, Jacques Derrida (an instantly recognisable name in intellectual discourse worldwide) shows how remembering can never be separated from forgetting, and argues that the archive is about the future rather than the past. Collectively the contributors demonstrate the degree to which thinking about archives is embracing new realities and new possibilities. The book expresses a confidence in claiming for archival discourse previously unentered terrains. It serves as an early manual for a time that has already begun.

Authors: Carolyn Hamilton
Categories: Social Science
Refiguring the Archive at once expresses cutting-edge debates on `the archive' in South Africa and internationally, and pushes the boundaries of those debates.

Colonialism and Modern Architecture in Germany

Authors: Lisa Moses Leff
Categories: History
In the aftermath of the Holocaust, Jewish historian Zosa Szajkowski gathered up tens of thousands of documents from Nazi buildings in Berlin, and later, public

Authors: Antoinette Burton
Categories: History
DIVThis anthology compares scholarly findings from around the world to comment on the creation, definition, and use of archival evidence in the writing of histo

Authors:
Categories: Performing Arts
This is the first full-length study to focus on the staging of Samuel Beckett's drama in Ireland and Northern Ireland. Beckett's relationship with his native la

The Objects of Evidence

Authors: Matthew Engelke
Categories: Social Science
Part of The Journal of the Royal Anthropological Institute Special Issue Book Series, the contributors to this volume share the conviction that anthropology can

Liner Notes for the Revolution

Authors: Daphne A. Brooks
Categories: Music
Liner Notes for the Revolution offers a startling new perspective on Black women musicians from Bessie Smith to Beyoncé. Informed by the overlooked contributio

The Oxford Handbook of Oral History

Authors: Donald A. Ritchie
Categories: History
The Oxford Handbook of Oral History brings together forty authors on five continents to address the evolution of oral history, the impact of digital technology,