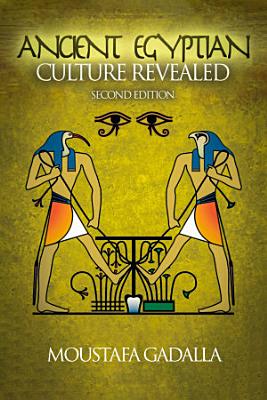 This book reveals several aspects of the Ancient Egyptian culture, such as the very remote antiquities of Egypt; the Egyptian characteristics and religious beliefs and practices; their social/political system; their cosmic temples; the richness of their language; musical heritage and comprehensive sciences; their advanced medicine; their vibrant economy; excellent agricultural and manufactured products; their transportation system; and much more. This Expanded Edition of the book consists of four Parts with a total of 16 Chapters, as well as three Appendices. Part I : The Peoples of Egypt consists of four chapters 1 through 4, as follows: Chapter 1: The Beginning covers the age of the Egyptian antiquities being at least 39000 years, in accordance with archaeological, historical and physical evidence; the Age of Leo and the Sphinx; as well as the age of the Egyptian Sothic calendar which is by far the most accurate calendar ever. Chapter 2: The Egyptian Populous covers the roots and characteristics of the [Ancient]Egyptian people, their housings, their settlements throughout the world; and the roles of foreigners in the history of Ancient Egypt. Chapter 3: The Most Religious covers Egyptian cosmology; monotheism and polytheism; animal symbolism ,creation of the universe, the concept of Maat; and the spread of the Ancient Egyptian religion throughout the world under new "names". Chapter 4: The Social/Political Order covers the basis and applications of the matrilineal/matriarchal principles; the matrilocal communities; the Egyptian grassroots republic system; the dual overseeing/administration governing system; and the documentation order of all matters in the Egyptian society Part II : The Cosmic Correlations consists of three chapters 5 through 7, as follows: Chapter 5: As Above, So Below covers the principles and applications of cosmic consciousness in the life of the Egyptians; and the cyclical renewal festivals as a form of such principles Chapter 6: The Pharaoh, The Cosmic Link covers the true rule of the Egyptian pharaoh as a Master Servant; how did the people rule; and much more. Chapter 7: Egyptian Temples provides a quick overview of the real function/objective of the Egyptian temple; the harmonic design parameters; and much more. Part III : The Learned Egyptian consists of five chapters 8 through 12, as follows: Chapter 8: The Divine Language provides a quick overview of the modes of writing in Ancient Egypt -- the alphabetical form of writing and the imagery pictorial metaphysical symbols/script ; as well as the cultured aspects of the Egyptian alphabetical language Chapter 9: The Egyptian Musical Heritage provides a quick overview of its musical heritage; the musical orchestras; the wide range of musical instruments; as well as dancing and ballet in Ancient Egypt. Chapter 10; Health and Medicine provides a quick overview about the international highest regards for Egyptian medicine; its medical profession; contents of the some Egyptian medical papyri regarding diagnosis, cures and treatments of various ailments, surgeries; and the wide range of prescriptions Chapter 11: Astronomy covers the astonishing accurate astronomical knowledge and practices such as astronomical observations and recordings, the zodiac cycle,etc Chapter 12: Geometry and Mathematics covers a quick overview of the subjects of sacred geometry and natural science, geodesy, mathematics & numerology; as well as their knowledge and applications of the sacred “ratios” of Pi and Phi. Part IV : The Vibrant Economy consists of four chapters 13 through 16, as follows: Chapter 13: The Cultivating Culture covers the outstanding application of dry-weather farming techniques; societal division of labor; and the farming community Chapter 14; The Manufacturing Industries covers The Egyptian knowledge of metallurgy & metalworking; their golden silver (electrum) products; their copper and bronze products; their glazing (glass and glazing) products; their iron products; their mining activities; miscellaneous products such as woodwork; fabrics; pottery; leather; paper; as well as some miscellaneous technological applications Chapter 15: Transportation Infrastructure covers a quick overview of the various high quality types of the Egyptian ships; major Egyptian coastal harbors; land transportation; as well as patrons and shrines of travel Chapter 16: The Market Economy covers the workings of the Egyptian market economy; business transactions; Egyptian exports (goods and services); Egyptian imports; as well as the rise and fall of international commerce, that was tied to Ancient Egypt as the economical engine of the ancient world. The contents of the three appendices are evident from their titles; being: Appendix A: Photographs -- The Rising Valley Appendix B: Photographs -- The Age of Leo and The Sphinx Appendix C: Photographs -- Astronomy

Authors: Moustafa Gadalla
Categories:
This book reveals several aspects of the Ancient Egyptian culture, such as the very remote antiquities of Egypt; the Egyptian characteristics and religious beli

Authors: Moustafa Gadalla
Categories: History
This book reveals several aspects of the Ancient Egyptian culture, such as the very remote antiquities of Egypt; the Egyptian characteristics and religious beli

Authors:
Categories: Books
Every 3rd issue is a quarterly cumulation.