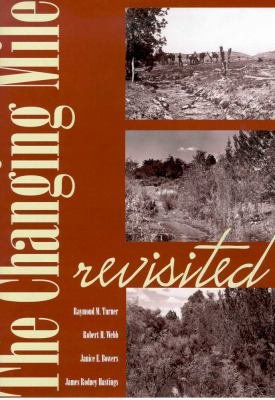 The Changing Mile, originally published in 1965, was a benchmark in ecological studies, demonstrating the prevalence of change in a seemingly changeless place. Photographs made throughout the Sonoran Desert region in the late 1800s and early 1900s were juxtaposed with photographs of the same locations taken many decades later. The nearly one hundred pairs of images revealed that climate has played a strong role in initiating many changes in the region. This new book updates the classic by adding recent photographs to the original pairs, providing another three decades of data and showing even more clearly the extent of change across the landscape. During these same three decades, abundant information about climatic variability, land use, and plant ecology has accumulated, making it possible to determine causes of change with more confidence. Using nearly two hundred additional triplicate sets of unpublished photographs, The Changing Mile Revisited utilizes repeat photographs selected from almost three hundred stations located in southern Arizona, in the Pinacate region of Mexico, and along the coast of the Gulf of California. Coarse photogrammetric analysis of this enlarged photographic set shows the varied response of the region's major plant species to the forces of change. The images show vegetation across the entire region at sites ranging in elevation from sea level to a mile above sea level. Some sites are truly arid, while others are located above the desert in grassland and woodland. Common names are used for most plants and animals (with Latin equivalents in endnotes) to make the book more accessible to non-technical readers. The original Changing Mile was based upon a unique set of data that allowed the authors to evaluate the extent and magnitude of vegetation change in a large geographic region. By extending the original landmark study, The Changing Mile Revisited will remain an indispensable reference for all concerned with the fragile desert environment.

Authors:
Categories: Technology & Engineering
The Changing Mile, originally published in 1965, was a benchmark in ecological studies, demonstrating the prevalence of change in a seemingly changeless place.

Toward Integrated Research, Land Management, and Ecosystem Protection in the Malpai Borderlands

Authors: Gerald J. Gottfried
Categories: Conservation of natural resources
Presents over thirty presentations from a 1999 conference in Douglas, Arizona, in which scientists and managers shared research progress and results concerning

Authors: Robert W. Adler
Categories: Science
Over the past century, humans have molded the Colorado River to serve their own needs, resulting in significant impacts to the river and its ecosystems. Today,

The Ribbon of Green

Authors: Carl E. Bock
Categories: Nature
The Appleton-Whittell Research Ranch is a tract of 8,000 acres on the Sonoita Plain that was established in 1968 by the Appleton family and is now part of the s

Authors: Sharon E. Kingsland
Categories: Science
In the 1890s, several initiatives in American botany converged. The creation of new institutions, such as the New York Botanical Garden, coincided with radical