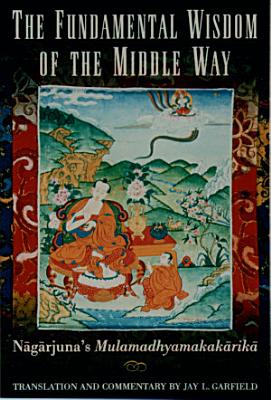 For nearly two thousand years Buddhism has mystified and captivated both lay people and scholars alike. Seen alternately as a path to spiritual enlightenment, an system of ethical and moral rubrics, a cultural tradition, or simply a graceful philosophy of life, Buddhism has produced impassioned followers the world over. The Buddhist saint Nagarjuna, who lived in South India in approximately the first century CE, is undoubtedly the most important, influential, and widely studied Mahayana Buddhist philosopher. His many works include texts addressed to lay audiences, letters of advice to kings, and a set of penetrating metaphysical and epistemological treatises. His greatest philosophical work, the Mulamadhyamikakarika--read and studied by philosophers in all major Buddhist schools of Tibet, China, Japan, and Korea--is one of the most influential works in the history of Indian philosophy. Now, in The Foundations of the Philosophy of the Middle Way, Jay L. Garfield provides a clear and and eminently readable translation of Nagarjuna's seminal work, offering those with little of no prior knowledge of Buddhist philosophy a view into the profound logic of the Mulamadhyamikakarika. Translated from the Tibetan, the tradition through which Nagarjuna's philosophical influence has largely been transmitted, Garfield presents a superb translation of Mulamadhyamikakarika in its entirety. Illuminating the systematic character of Nagarjuna's reasoning, as well as the works profundity, Garfield shows how Nagarjuna develops his doctrine that all phenomena are empty of inherent existence and essenceless. But, he argues, phenomena nonetheless exist conventionaly, and that indeed conventional existence and ultimate emptiness are in fact the same thing. This represents the radical understanding of the Buddhist doctrine of the two truths, or two levels of reality. Nagarjuna reinterprets all of Buddhist metaphysics and epistemology through this analytical framework--"a systematic and beautifully elegant philosophical dissection of reality." In turn, Garfield goes on to offer the only verse-by-verse commentary based upon the Indo-Tibetan Prasangika-Madhyamika reading of Nagarjuna, the school most influential in the development of Mahayana philosophy in Tibet, China, Korea, and Japan. Written specifically for the Western reader, the commentary explains Nagarjuna's positions and arguments in the language of Western metaphysics and epistemology, and connects Nagarjuna's concerns tho those of Western philosophers such as Sextus, Hume, and Wittgenstein. A fascinating and accessible translation of the foundational text for all Mahayana Buddhism text, The Fundamental Wisdom of the Middle Way will enlighten all those in search of the essence of reality.

The Fundamental Wisdom of the Middle Way : Nagarjuna's Mulamadhyamakakarika

Authors: Nagarjuna
Categories: Religion
For nearly two thousand years Buddhism has mystified and captivated both lay people and scholars alike. Seen alternately as a path to spiritual enlightenment, a

The Fundamental Wisdom of the Middle Way:Nagarjuna's Mulamadhyamakakarika

Fundamental Wisdom of the Middle Way

Authors: Tsong-kha-pa Blo-bzang-grags-pa
Categories: Philosophy
Tsong kha pa (14th-century) is arguably the most important and influential philosopher in Tibetan history. An Ocean of Reasoning is the most extensive and perha

Authors: Dalai Lama
Categories: Religion
The Dalai Lama opens The Middle Way with an elegant argument for the power of compassion in cultivating a happy life. From there, he connects core ideas of Budd

Authors: Barry Kerzin
Categories: Philosophy
Explore the Mulamadhyamakakarika the way the Dalai Lama teaches it. Nagarjuna’s Fundamental Verses on the Middle Way, or as it’s known in Tibetan, Root Wisd

Authors: Barry Kerzin
Categories: Philosophy
Explore the Mulamadhyamakakarika the way the Dalai Lama teaches it. Nagarjuna’s Fundamental Verses on the Middle Way, or as it’s known in Tibetan, Root Wisd