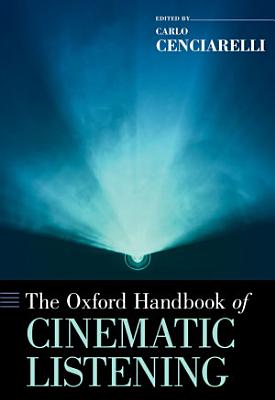 The Oxford Handbook of Cinematic Listening explores the place of cinema in the history of listening. It looks at the ways in which listening to film is situated in textual, spatial, and social practices, and also studies how cinematic modes of listening have extended into other media and everyday experiences. Chapters are structured around six themes. Part I ("Genealogies and Beginnings") considers film sound in light of pre-existing practices such as opera and shadow theatre, and also explores changes in listening taking place at critical junctures in the early history of cinema. Part II ("Locations and Relocations") focuses on specific venues and presentational practices from roadshow movies to contemporary live-score screenings. Part III ("Representations and Re-Presentations") zooms into the formal properties of specific films, analyzing representations of listening on screen as well as the role of sound as a representational surplus. Part IV ("The Listening Body") focuses on the power of cinematic sound to engage the full body sensorium. Part V ("Listening Again") discusses a range of ways in which film sound is encountered and reinterpreted outside the cinema, whether through ancillary materials such as songs and soundtrack albums, or in experimental conditions and pedagogical contexts. Part VI ("Across Media") compares cinema with the listening protocols of TV series and music video, promenade theatre and personal stereos, video games and Virtual Reality.

The Oxford Handbook of Cinematic Listening

Authors: Carlo Cenciarelli
Categories: Performing Arts
The Oxford Handbook of Cinematic Listening explores the place of cinema in the history of listening. It looks at the ways in which listening to film is situated

Authors: Sumanth Gopinath
Categories: Music
The two volumes of The Oxford Handbook of Mobile Music Studies consolidate an area of scholarly inquiry that addresses how mechanical, electrical, and digital t

The Oxford Handbook of Film Theory

Authors: Assistant Professor of English Kyle Stevens
Categories: Motion pictures
Despite changes in the media landscape, film remains a vital force in contemporary culture, as do our ideas of what "a movie" or "the cinematic" are. Indeed, we

Static in the System

Sound Design is the New Score

Authors: Danijela Kulezic-Wilson
Categories: Music
The practice of blurring the line between score and sound design has transformed contemporary film soundscape by challenging not only the long-established hiera

A Handbook for Teaching African Literature

Authors: Richard Allen
Categories: Performing Arts
This volume is comprised of new essays on a wide range of topics by both film scholars and philosophers who share the commitment to conceptual investigation, lo