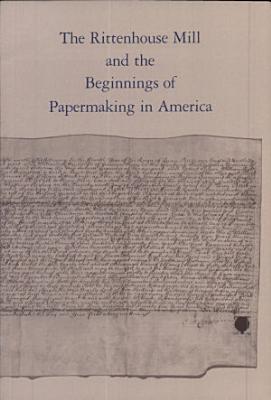 In 1691 the Rittenhouse family opened a paper mill outside of Philadelphia and for the next forty years were the only paper manufacturers in America. Wilhelm Rittinghausen, later known as William Rittenhouse, was born in Mulheim, Germany and learned the paper making trade. He moved to Amsterdam at a young age and then emigrated to America with his three children in 1687. William's descendants continued to be active in the paper making business into the nineteenth century when the productivity of the mill gaveway to the new technology.

The Rittenhouse Mill and the Beginnings of Papermaking in America

Authors: James N. Green
Categories: Paper industry
In 1691 the Rittenhouse family opened a paper mill outside of Philadelphia and for the next forty years were the only paper manufacturers in America. Wilhelm Ri

The U. S. Paper Industry and Sustainable Production

Authors: Maureen Smith
Categories: Science
The problems recyclers face with wastepaper are connected to the issues addressed by forest advocates, as well as to the difficulties confronted by those involv

A History of the Book in America: Volume 1, The Colonial Book in the Atlantic World

Authors: Hugh Amory
Categories: Language Arts & Disciplines
A History of the Book in America is a five-volume, interdisciplinary series that offers a collaborative history of the book in American culture from the earlies

A History of the Book in America, 5-volume Omnibus E-book

Authors: David D. Hall
Categories: History
The five volumes in A History of the Book in America offer a sweeping chronicle of our country's print production and culture from colonial times to the end of

The Dictionary of the Book

Authors: Sidney E. Berger
Categories: Language Arts & Disciplines
Finally, here is the definitive glossary of the book, offering readers all the terms they will need for thorough understanding of how books are made, the materi

The Fabric of Empire