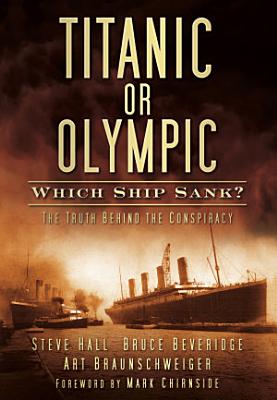 The Titanic is one of the most famous maritime disasters of all time, but did the Titanic really sink on the morning of 15 April 1912? Titanic's older sister, the nearly identical Olympic, was involved in a serious accident in September 1911 - an accident that may have made her a liability to her owners the White Star Line. Since 1912 rumours of a conspiracy to switch the two sisters in an elaborate insurance scam has always loomed behind the tragic story of the Titanic. Could the White Star Line have really switched the Olympic with her near identical sister in a ruse to intentionally sink their mortally damaged flagship in April 1912, in order to cash in on the insurance policy? This book addresses some of these conspiracy theories and illustrates both the questionable anomalies and hard technical facts that will prove the swtich theory to be exactly what it is - a mere legend.

Titanic or Olympic: Which Ship Sank?

Authors: Steve Hall
Categories: Transportation
The Titanic is one of the most famous maritime disasters of all time, but did the Titanic really sink on the morning of 15 April 1912? Titanic's older sister, t

Titanic: The Myths and Legacy of a Disaster

Authors: Roger Cartwright
Categories: Transportation
On 15 April 2012, 100 years had passed since the Royal Mail Steamer Titanic hit an iceberg and foundered in the North Atlantic with the loss of 1,503 lives. Had

Authors: Robin Gardiner
Categories: Transportation
Since the best-selling Titanic: The Ship That Never Sank was published in 1998, author Robin Gardiner has unearthed a wealth of new evidence in support of his t

The Ship of Dreams

The Man Who Sank Titanic

Authors: Sally Nilsson
Categories: Transportation
Robert Hichens has gone down in history as the man who was given the famous order to steer the Titanic away from the iceberg and failed. Following this, his fal

Titanic and Her Sisters

Authors: Janette McCutcheon
Categories: Biography & Autobiography
Almost a century since the launch of Titanic, the story of the Olympic-class ships is told through the medium of original postcards.

The Rough Guide to the Titanic

Authors: Rough Guides
Categories: History
A century after the most famous shipwreck in history, The Rough Guide to the Titanic tells the full compelling story of the supposedly unsinkable liner. A compr

What Really Sank the Titanic:

Authors: Jennifer Hooper McCarty
Categories: History
Was the ship doomed by a faulty design? Was the hull's steel too brittle? Was the captain negligent in the face of repeated warnings? On the night of April 14,

The Titanic For Dummies

Authors: Stephen J. Spignesi
Categories: History
The Titanic For Dummies paints the whole picture of the most famous maritime disaster. It examines the building of the ship, life onboard during its maiden voya

Authors: Brad Matsen
Categories: Transportation
After rewriting history with their discovery of a Nazi U-boat off the coast of New Jersey, legendary divers John Chatterton and Richie Kohler decided to investi