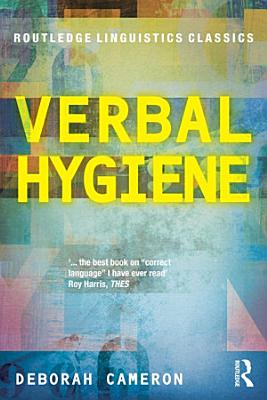 In Verbal Hygiene, Deborah Cameron takes a serious look at popular attitudes towards language and examines the practices by which people attempt to regulate its use. Instead of dismissing the practice of ‘verbal hygiene’, as a misguided and pernicious exercise, she argues that popular discourse about language values – good and bad, right and wrong – serves an important function for those engaged in it. A series of case studies deal with specific examples of verbal hygiene: the regulation of ‘style’ by editors, the teaching of English grammar in schools, the movements for and against so-called ‘politically correct’ language and the advice given to women on how they can speak more effectively. This Routledge Linguistics Classic includes a new foreword which looks at how the issues covered in the case studies have developed over time and a new afterword which discusses new concerns which have emerged in the last 15 years, from the regimentation of language in the workplace to panics about immigration and terrorism, which are expressed in linguistic terms. Addressed to linguists, to professional language-users of all kinds, and to anyone interested in language and culture, Verbal Hygiene calls for legitimate concerns about language and value to be discussed, by experts and lay-speakers alike, in a rational and critical spirit.

Authors: Deborah Cameron
Categories: Language Arts & Disciplines
In Verbal Hygiene, Deborah Cameron takes a serious look at popular attitudes towards language and examines the practices by which people attempt to regulate its

Authors: Lucy Burke
Categories: Language Arts & Disciplines
This is a core introduction to the most innovative and influential writings to have shaped and defined the relations between language, culture and cultural iden

An Introduction to Sociolinguistics

Language Policies and the Politics of Language Practices

Authors: Massimiliano Spotti
Categories: Education
This edited volume consists of chapters celebrating the career of scholar Sjaak Kroon, who has produced ground-breaking work in the field of ethnography of educ

Authors: Joseph Sung-Yul Park
Categories: Language Arts & Disciplines
The global spread of English both reproduces and reinforces oppressive structures of inequality. But such structures can no longer be seen as imposed from an im

The Languages of Nation

Authors: Charlotte Krolokke
Categories: Language Arts & Disciplines
Gender Communication Theories and Analyses: From Silence to Performance surveys the field of gender and communication with a particular focus on feminist commun

Authors: Victoria Bergvall
Categories: Language Arts & Disciplines
Rethinking Language and Gender Research is the first book focusing on language and gender to explicitly challenge the dichotomy of female and male use of langua

Authors: Margaret Thomas
Categories: Language Arts & Disciplines
What was the first language, and where did it come from? Do all languages have properties in common? What is the relationship of language to thought? Fifty Key