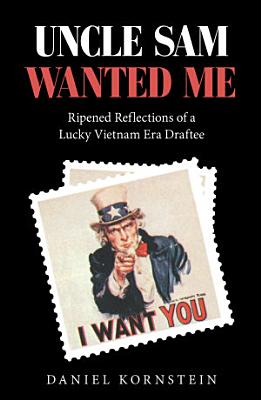 Uncle Sam Wanted Me is the story of Daniel Kornstein’s being drafted out of the comparative comforts and intellectual stimulation of law school into the rigors and worries of Army life during the Vietnam War. In clear, entertaining, and memorable language, Kornstein looks back more than half a century to explain and try to understand how he and his generation felt about and dealt with the moral issues posed by the Vietnam draft. The author describes what it was like to receive his draft notice as he studied for his first-year final exams, what his reactions were, and what choices he made and why. Like Proust, the seventy-four-year-old author moves back through time into his memory, dipping into and out of his consciousness, with his old Army dog tags as his madeleine. Kornstein turns the story of his being drafted into the Vietnam Era Army into an expansive meditation on coming of age in the shadow of an unpopular war and making important life decisions about reacting to that war. It is his eloquent attempt to use his personal experiences and moods to explore larger issues, to connect social, cultural and historical dots about the relationship between the military and civilian spheres of life in America, to think about what it even means to be an American citizen. The climax of Kornstein’s time in uniform was being assigned as a legal clerk for the prosecutors of a court-martial arising from the horrible 1968 My Lai Massacre in which U.S. soldiers killed hundreds of unarmed, non-combatant old men, women and children. He discusses and analyzes that case. In a final chapter, the author provides a personal long-delayed after-action report summarizing significant lessons from his two-year military experience as a draftee. He considers the pros and cons of an all-volunteer military, whether a draft is necessary and if so how to make it fair and equitable, the possibility of other forms of national service, our continuing entanglement in undeclared wars, more recent examples of war atrocities, and the residual effects of military service on individuals. Uncle Sam Wanted Me offers insights, ripened reflections, for the author’s generation as well as for a new generation that overwhelmingly isn’t personally exposed to anything military, much less the draft.

Authors: Daniel Kornstein
Categories: Biography & Autobiography
Uncle Sam Wanted Me is the story of Daniel Kornstein’s being drafted out of the comparative comforts and intellectual stimulation of law school into the rigor

Everything You Want Me to Be

Authors: Henry Harrison Brown
Categories: Self-Help
Change the negative affirmations and redirect the flow of positive energy into the things you once desired, find inspirational power to use them and give them t

How Do You Want Me?

Authors: Ruby Wax
Categories: Biography & Autobiography
Sunday Times Bestseller With a brand new introduction for 2020. How Do You Want Me? is critically acclaimed as brutally honest, vivid and gripping. Ruby Wax's u

The Man They Wanted Me to Be

Authors: Jared Yates Sexton
Categories: Social Science
Based on the provocative and popular New York Times op–ed, this memoir alternates between the examination of a working–class upbringing and a cultural analy

The Me I Want to Be, Teen Edition

Authors: John Ortberg
Categories: Young Adult Nonfiction
The Me I Want to Be by John Ortberg—the bestselling author of When the Game Is Over, It All Goes Back in the Box; God Is Closer Than You Think; and The Life Y

Does God Still Want Me?

Authors: Gord Mann
Categories:
Gord has been concerned by the stagnation of people that claim to have a relationship with God. Many people are spinning their wheels or playing church without

You Want Me to Do What

Authors: Nan Demars
Categories: Business & Economics
An expert on business ethics discusses the complex issues that arise from the increased responsibilities placed upon administrative assistants and other support